THE PRODUCE OF THE CAFAGGIO ORGANIC ESTATE

In the ancient hamlet of Cafaggio, from the early years of the nineteenth century the noble landowners worked alongside a large farming and artisan community producing wine, vinsanto, olive oil, honey, silk, soap and precious cypress wood. Agricultural tools were forged and all sorts of farmyard animals were bred, as well as working animals and others reared for meat. In the 1920s Ugo Benci, an intellectual with a marked entrepreneurial inclination, decided to undertake the cultivation of irises at Cafaggio, the roots of which were used for face powder and perfumes. He was also one of the first wine producers in Italy to successfully export to the United States large quantities of his wine, Chianti Benci.

Impruneta boasts an age-old tradition of olive oil, which has always been its main agricultural product, as well as the manufacture of the large terracotta urns in which it is kept. This oil is traditionally recognised for its high quality, characterised by notes of artichoke and fresh almonds, and for its sharp spicy taste. It is typically made with olives from the cold-resistant tree variety called Leccino, also known as the Madonna dell’Impruneta. Legend has it that in 1499, during a procession of the miraculous Image of the Madonna, an olive bough got caught on the wooden panel, and, once inside the walls of Florence, fell off. Florence was at that time at war with Pisa and this incident was considered to be a good omen and indicative of imminent victory. The olive tree from which the bough came is still alive and survived even the exceptional freeze of 1985. Ever since then it has been called the Madonna’s Olive Tree from which the variety name Madonna dell’Impruneta is taken.

The Estate farm, with full organic status, lies at 300 metres above sea level. It consists of 100 hectares of ancient woodland, 11 hectares of olive groves with 1,500 Frantoio, Moraiolo and Leccino olive trees, and 2 hectares of specialisaed vineyards planted with Sangiovese, Cabernet and Merlot.  We devote ourselves to the production of the IGT Toscana Perenrico with the self-same passion as our ancestors. Today the Cafaggio organic extra virgin olive oil is our flagship product, and thanks also to collaboration with some of the leading scholars and scientists in the sector, in recent years it has won several very important national awards.

All our products may be purchased directly on the estate or shipped. 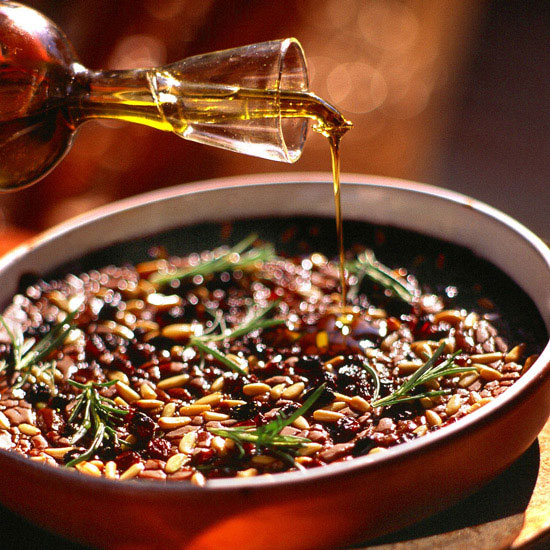 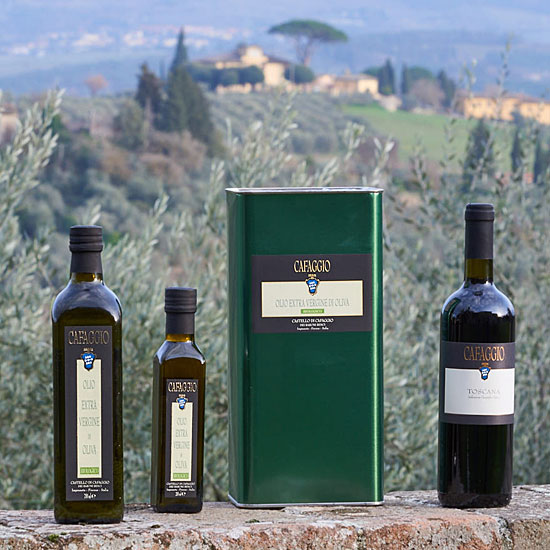 The correct storage for the oil calls for particular careOil suffers from the heat and the cold (it solidifies at +5°C) and in both cases it loses its chemical and organoleptic properties. It also suffers from light and air as these cause oxidation. If not filtered, it must be decanted frequently in order to eliminate the lees (natural sedimentation deposits).The best way to store olive oil is to filter it and keep it tightly sealed away from the light, if possible at a temperature of between 14 and 18°C.

Cafaggio organic extra-virgin olive oil, with an average annual production of 12 quintals (approximately 1700 x 750 ml bottles), is stored in dark glass bottles of a particular colour and thickness to enhance its quality. It has an average acidity of 0.16, a fruity green-olive bouquet reminiscent of artichokes, and a pleasant piquant-bitter flavour typical of the Tuscan extra-virgin olive oils.

The olives are picked entirely by hand during a period that may span from November 5th to December 10th, depending on how mature they are. As soon as they are picked the olives are arranged in crates (similar to those used for fruit) in order to avoid bruising and to ensure good air circulation, thus preventing any fermentation that could negatively affect the olive oil (rotting or mould).

Within 48 hours of picking the olives are taken to the mill to be processed. Speed is vital because when the fruit is still fresh an organoleptically perfect juice (oil) is obtained with the acidity practically nil (0.16 – 0.20).

The choice of mill is fundamental since failures in care and processing times may cause irremediable alterations to the oil. The olives should be washed and then kneaded for between 20 and 35 minutes, depending on how mature they are. An olive paste is produced from which, using centrifugal force, an average of approximately 11/13% extra virgin olive oil is extracted. 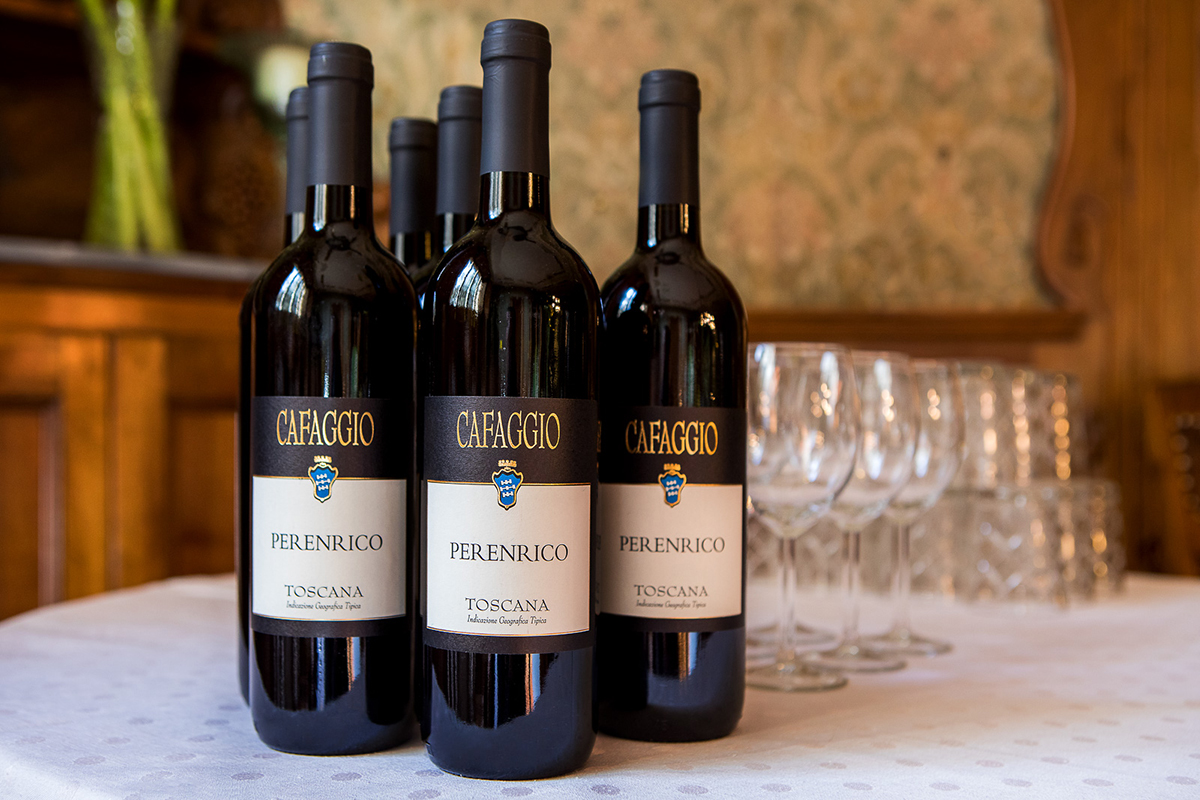 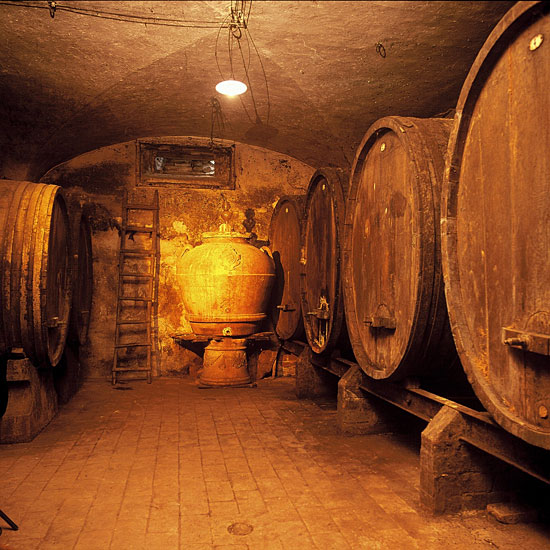 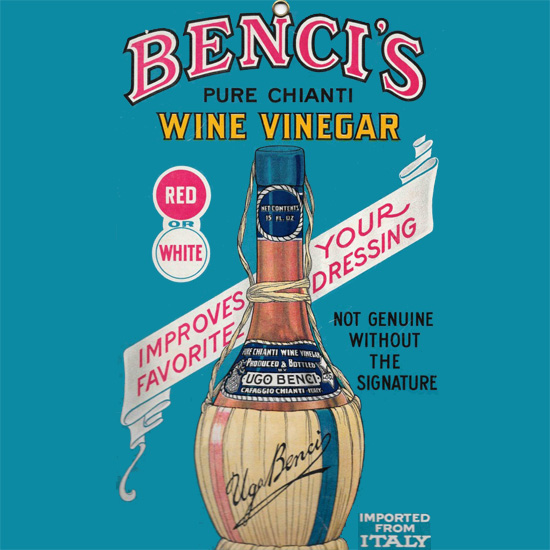 Our IGT Toscana Perenrico wine is produced using selected grapes: 70% Sangiovese, the typical Chianti Classico grape variety, 20% Merlot to soften the tannins and 10% Cabernet to harmonise the structure. It is aged for around one year in oak casks. It is a wine that is at once fresh and full-bodied, important but authentic. And these are not easy combinations to find!

Cafaggio wine vinegar is produced, mainly for our own consumption, from the fermentation of the grapes in oak casks for 6 months to a year. Once the transformation has taken place, the vinegar is allowed to mature for another year, again in oak casks. When an acidity level of 7,5 % is reached, the vinegar is filtered and bottled.

Cafaggio honey is produced, mainly for our own consumption, to traditional methods. It is only extracted for centrifuging and decanting and is not filtered or treated. For this reason it has an intense perfume and creamy consistency. It is much appreciated by our guests at breakfast-time, when it is delicious with ricotta and pecorino cheese.

The flavours of Tuscany on your table

We use cookies to ensure that we give you the best experience on our website. If you continue to use this site we will assume that you are happy with it.Ok